One of my favorite movies is The Fifth Element. It's got action, romance, humor, a futuristic setting...a little bit of something for everyone.  I've watched it countless times, but I recently was struck by a particular scene and how it relates to writing. I've tried to find the scenes on YouTube, but they don't seem to be there, so you'll have to put up with my descriptions instead of the visuals.

Korben Dallas is just waking up to an annoying phone ringing.  He fumbles around, answering the phone and trying to wake up.  He grabs his cigarette ("to quit is my goal" intones the computer voice) and, putting it in his mouth, starts searching for a match or lighter.  He picks up one match box, shakes it and because it's apparently empty, keeps searching on his shelf.  While this goes on, his mother (in that tone that only mothers can use) harangues him about calling, visiting, and anything else she thinks of to harp on.  Finally, he gets to a match box that has something in it.  He pulls open the cardboard box.  You see two matches.  He uses one to light his cigarette (which, by the way, is one-fourth tobacco and three-fourths filter) and tries to get his mother off the phone and start his day.

And for the next two hours or so, Korben is off to save the world.  (I don't want to give away all the action, on the small chance you haven't seen this sixteen-year-old movie {Holy Crap! Sixteen years!})

So here comes the important part.  {Spoiler Alert - here's how Korben saves the world}. Korben needs to ignite a fire to complete the ultimate weapon - the Fifth Element.  And lo and behold, no one has any matches. 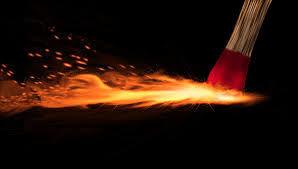 Except Korben.  He has that matchbox in his pants pocket.  He has one match to save the world.  If it blows out, the world (the universe, too, just for good measure) is overcome with death.  If it doesn't light because it's wet—poof! Game over.  If the head of the match breaks off, finis.

This being a movie, of course Korben saves the world (and gets the girl).

All of that is a long way to ask: what is your match?  What have you put in your manuscript—what little throwaway line of dialogue, what little gesture, what little character flaw—that really completes the story?
Posted by Faith at 4:45 PM