Tools of the Trade: The Well-Spoken Thesaurus

One of the books I have on my work desk is The Well-Spoken Thesaurus.  It's a great way to think outside of your normal patterns and give your manuscript a bit of flair.

It's not a typical thesaurus where you look up the word and you get a litany of words to substitute.  It includes phrasing, which can be just as important as not repeating the same words over and over.

One example:
His ___ were like a ____
His ____ were the____ of a ___
Example: The skin of his wrinkled brown face had a dry and scaly look; his hands were the hands of a crocodile.  His movements were marked by the lizard's disconcertingly abrupt clockwork speed; his speech was thin, fluty, and dry.  (Aldous Huxley, Chrome Yellow)

Another example:
Persuade - prevail upon, strike a sympathetic chord, or cajole
Persuade not to - dissuade
Persuade to speak - draw him out
Persuaded me to - moved me to

And possibly a more useful example:
Said - expressed, indicated, remarked, made clear that, said with a touch of, issued a statement, said with a quiver of, implored, broke into the conversation, gave full expression to, an irreverent voice put in, put it to her, articulated, dropped her voice mournfully, she went on, she went off into a, as murmurs seeped through the pews, declared, drawled out the word, couched in terms of, put it to him squarely, addressed some remark to him.

How are you doing on your goals this year?
Posted by Faith at 11:35 AM No comments:

Don't Meddle With My Mettle

It's not often I see either meddle or mettle in a manuscript, although I sometimes do see the occasional medal.

Mettle is defined as the courage to go on.  It often gets tested in battle.

Meddle is what your best friend does when she tries to fix you up on a blind date.  Or, you can also think of the most popular verison of meddling: 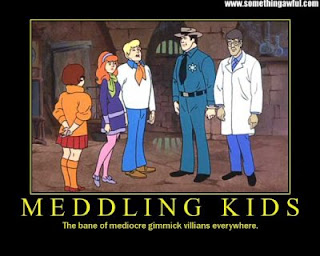 {I just had a flashback to when my son was younger and could watch Scooby Doo all day (and all night!)}

So, when in doubt, ask yourself: is my character engaging in Scooby Doo and the gang behavior by meddling in something?  Or is my character filled with determination and courage to continue her quest?
Posted by Faith at 11:10 AM No comments:

I recently had an author call me to talk about his reviews on Amazon.  He's gotten several reviews on his three books, mostly positive.  But there's always someone who wants to spoil the party, so he has some lower reviews as well.

He was thinking of stopping his current series and starting a new one, all based on the comments in the reviews.  My advice to him: DON'T.

2) The strength and impact of the review matters. Does the review say something to the effect of: I hate (your genre) and this book sucked? Did the review actually point out inconsistencies, grammar issues (heavens, no!), provide issues that you could logically discuss?  Or was it basically a rant, offering a personal opinion? There's practically nothing you can do to change a person's opinion about something, so why waste your time stewing over it?

3) Some people are mean.  You know who they are in your real life, and how to avoid deal with them.  But online, you can't employ the same methods.  Responding will generally get you more trouble than you started with and could end up consuming your energy - not a good place to be.  Accept that some people enjoy pointing out the perceived flaws and failings; choose to be someone who enjoys letting stuff like that go.

4) Realize that readers make up their own minds. Personally, I don't put much stock in any review online.  I'm a little judge-y on how the review itself is written (please, dear God, save me from reviews written in all caps or in text-speak!).  I look at the overall numbers and if there are more one- and two-star reviews than the others, I'll take a peek at what those say.  I had another author share that she particularly appreciated a one-star review from someone who NEVER READ THE BOOK (insert your own sarcastic tone here).  Reviews like that get tossed out of my mind and almost have the opposite effect - I'll read the book just to prove them wrong!

I'd like to leave you with this final thought: as an author, you have worked hard to put out a piece of art.  Art is subjective; there will be no two people who get the exact same thing out of it. But that's ok.  You didn't really do it for them, did you?  You did it to get rid of those voices in your head (really, once they start telling you what to have for breakfast, that's when you should see the head-shrinker!); you did it to explore an issue; you did it to create a new world and answer the question what if? And you should be proud of it.  After all, not everyone has the talent and drive to do that (me included!)

Let's welcome this month's author, Edward Coburn.  He's writing a series (The Dog Who Ate the ???), a twenty-six title series that focuses on Adam, a physic "finder" living in a small town, as well as The Last Killer Standing.

1)      What were your favorite books growing up? In grade school and junior high, I’d probably say SciFi, though I did read a bit of Tarzan as well. In high school I read mostly sports books where the star was in high school and, of course, he got the girl. Later I read most anything: SciFi, adventure, and detective.
2)      Now that you have, let’s say—some life experience, what would you tell your younger self? Get serious about something and really try to do your best and not waste so darn much time.
3)      Describe your typical day. Unfortunately I leave for word at the DMV (I am a computer programmer) at 7:00 and my day starts at 7:30. At breaks and lunch, I try to make a few notes to work with in the evening (we’re not allowed to use our work computer for anything personal and also not allowed to bring any computer devices on site such as laptops). Sometimes I run to the library for research or using one of their computers. I leave for home at 4:30, get home at 5:00, supper and then work for a couple of hours. Then a couple hours of TV with the wife. I’d really rather write then, too, but domestic tranquility trumps writing.
4)      Who is your favorite character in your books? I’d have to say Adam in my series The Dog Who Ate The ???. He is psychic and rich, two things I wish I was. His psychic dog, Bagel the beagle, is fun as well.
5)      What do you do when writer’s block shows up, settles in, and makes itself comfortable? I’d have to say writer’s block is really not an issue with me; writer’s laziness is, however. It seems that I am never short of ideas but, sometimes, I just don’t feel like writing (especially after programming for eight hours).
6)      Do you find yourself pulling details from “real life” or does your imagination rule the roost? I use a bit of real life, but most of my ideas come from movies, TV, reading, and listening to books on tape while driving to and from work. I have a very fertile imagination and many times a word or two a character somewhere says will launch an idea. I wrote an entire book (The Last Killer Standing) from an idea for the title of a book. I thought the book would be about something; it wasn’t, but the idea was so good, I used it to write the book.
7)      What was the first manuscript you wrote (even if it never saw the light of day)? I wrote a book called “Sky Search to Turon,” a SciFi book that I don’t remember much about but I do remember it had something to do with Acid wars. The interesting thing is I read a book years later in which there were Acid wars.
8)      Have you ever pursued traditional publishing? Or did you go straight for indie publishing? For many years but, honestly, I think it’s a good thing they weren’t interested. Especially in today’s publishing world. They would have to offer me a lot of money before I would give up the convenience of epublishing.
9)      What Works In Progress are brewing?  Any target dates for publication? I am about to turn over the fourth Dog book “The Dog Who Ate The Drawing” to my editor (Faith, of course). I’m excited about the book because it is about a search for a gold mine and people like treasure hunts. I have already been making notes for the fifth book which will be Elephant and the sixth which will be Flintlock.
10)   How can fans reach you?
Website is edwardjcoburn.com
Blog for the dog books is http://dogwhoate.blogspot.com/
Blog for The Last Killer Standing is http://lastkillerstanding.blogspot.com/
Twitter is https://twitter.com/Edwardjcoburn
Facebook is https://www.facebook.com/#!/ed.coburn.77
LinkedIn is http://www.linkedin.com/profile/view?id=36909758&trk=hb_tab_pro_top
Email is authorof22@yahoo.com
Author page ishttp://www.amazon.com/EdwardCoburn/e/B009KYNIW4/ref=ntt_athr_dp_pel_1