And away we go with our questions:


1)      What were your favorite books growing up? Setting aside the fact I’ve never really grown up, a book which will always stay with me is “Bury My Heart at Wounded Knee” by Dee Brown. I read it when I was 9 years old. A history of the American West as told from the POV of Native Americans, it left quite an impression on me and certainly shaped many of my beliefs and values, which I carry to this day.
2)      Now that you have, let’s say—some life experience, what would you tell your younger self? In terms of writing? I would have to say, “Don’t dawdle. If you have a story in mind, write it. Stick with it. Don’t quit after five or six chapters.” I can’t recall how many stories I started but never finished in my youth; who knows what could have become of them if I had seen them through to completion.
I’d also probably tell myself, “You’re not as good as you think you are, but you’ll never know unless you work at it.”
3)      Describe your typical day. Get up, make coffee, check email, check Twitter, get dressed, go to work, and come home. Try to find time to write, which is easier to do on weekends. I also watch too much TV but I also use it as a learning experience; I have picked up subtle inspiration for plots and sub-plots from the host of cop and detective shows my wife and I watch on DVD. See? The Idiot Box has some positive value!
4)      Who is your favorite character in your books? Wow. I would suppose it’s my MC, Noelani Lee. She’s a private eye with a multitude of personal baggage and enough flaws to keep her interesting, but she‘s not off-putting. She’s not perfect by any stretch of the imagination, but she’s good at what she does, even if she she’s prone to taking too many jobs for which she knows she won’t get paid. (In my WIP, her cousin goes over her books one day and declares her a “cliché.”) She is like me in some ways as she has a low tolerance for stupidity and arrogance; and while the radar which tracks her mistrust of strangers is always on, she cares deeply about her family and friends and will drop anything to help them.
5)      What do you do when writer’s block shows up, settles in, and makes itself comfortable? I don’t believe there is such a thing as “writer’s block,” which I view as a handy-dandy excuse many writers use when they can’t put words on paper. However, I do believe in “writer’s blank”—as in, something to fill in. The words are there, but they just aren’t appearing on paper; you know what your characters are supposed to say and do and where your plot is supposed to go next, but the story languishes, awaiting your next move as the puppet master. To me, while writer’s block insinuates the words aren’t coming; writer’s blank means they are just below the surface, waiting to be set loose and fill in the blanks on a page. All it takes is a little thought and weighing of ideas and alternatives for plot, character actions, etc., for them to flow.

What I do when I encounter “writer’s blank,” I step away from the manuscript, physically, but maintain contact with it mentally. For example, with my current WIP, I recently found I had painted myself into a corner with regard to the plot and what was going to happen next. (This happens a lot, I might add, as my plots tend to be somewhat complicated.) Anyway, while I wasn’t actually writing anything, I was tossing around ideas in my head like a beach ball at a rock concert; maybe this will work…nah, what about this? Then something came to me—perhaps something I saw on TV or heard on the radio—and boom, I was writing again.
Basically, I believe you have to think and write around whatever obstacle is in your way. When you think things through, you begin to fill in the blanks and the story tells itself.
6)      Do you find yourself pulling details from “real life” or does your imagination rule the roost? Mostly I let my imagination run amok, although I will pull some details and plot points from real-life incidents. For example, in the first chapter of THE KONA SHUFFLE, my MC is sexually assaulted by a politician in a casino parking garage; this was a not-so-loose variation on a real-life incident involving a candidate for governor of Nevada a few years ago.
7)      What was the first manuscript you wrote (even if it never saw the light of day)? I completed a play in longhand when I was in high school, but as for prose, I finished a manuscript called SPLITTING KINGS about a dozen years ago; a former newspaper editor boss was kind enough to review it for me, but in hindsight, it was bad. I started rewriting it a few years ago and still have it trunked, but in the interim I’ve moved on to other, hopefully better projects.
8)      Have you ever pursued traditional publishing? Or did you go straight for indie publishing? My collection of rejections from literary agents is rather impressive. In fact, I used them to paper a couple walls in our living room. So I went indie and have no regrets about doing so.
9)      What Works In Progress are brewing?  Any target dates for publication? I’m about 40,000 words into THE HILO HUSTLE, the next Noelani Lee adventure, which I hope complete and have ready for publication later this year or in early 2014. I previously completed a manuscript called THE BLACK SAND BOOGIE but it needs work—I am overhauling the plot and some characters. Hopefully it will be ready for the light of day in the fall of 2014.
10)   How can fans reach you?
Blog: http://headfirstintothedeepend.typepad.com/blog/
Twitter: @TBradleywrites
Amazon: http://www.amazon.com/Tom-Bradley-Jr./e/B00CEAUMPM/ref=sr_tc_2_0?qid=1375835728&sr=1-2-ent
Posted by Faith at 8:35 PM No comments:

The results are in!  For the first half of 2013, your favorite goofs so far:

#2 - silk top that covered her beasts **should be** breasts.

These three will in contention for the grand prize after the goofs from July through December are voted on.  Aren't you proud, dear authors?

Email ThisBlogThis!Share to TwitterShare to FacebookShare to Pinterest
Labels: contest, The Atwater Group

How exposed are you?  I don't mean in a steamy video sort of way...I mean, how are you getting the word out about your book(s)? There are tons of ways to get exposure (again, in a good way - not an expose on TMZ!).

Here are a few of my clients and what they have done:

Julie Napier released her book Tender Thorn in March.  She shared a video with me from her local news show where she was a featured guest.  Pretty cool, huh?


MJ Pullen had a Twitter chat with WritersKaboodle to reach out to fans: 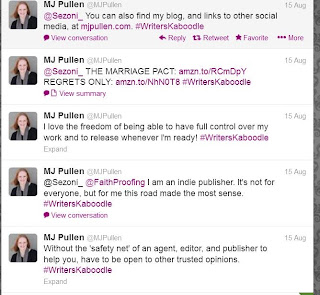 Kelly Ilebode has worked with her local Barnes & Noble to give a presentation on self-publishing.

Guest posting is another great way to get exposure.  Kevin Hardman was featured on Joe Konrath's blog

And don't forget the power of the simple interview.  I feature an author each month in my newsletter.  The newsletter gets exposure to the mailing list, Facebook, and Twitter - a great way to get your name out there.


What other interesting ways have you thought of to get the word out?  Feel free to share in the comments!
Posted by Faith at 6:56 PM No comments:

A Book and A Chat

I am proud to announce that the Atwater Group is the sponsor of A Book and A Chat. Several times a week, host Barry Eva interviews authors from best-sellers to local, independent authors.

Check out the audio for the promo.