Can You Teach Someone to Write?

Early in the week, I was sick.  And the hubby was on a trip, so I had to suck it up and take care of myself.  But all I planned to do was sit on the couch and take medicine, so it wasn't that difficult.  I couldn't focus on a computer screen, so I watched the big screen instead.  I got caught up on my General Hospitals (oh the intrigue! oh the double-crosses! oh the passion!).  But then I pulled out the big guns: Hugh Grant.

I was cruising through the On-Demand section from our cable provider and saw Music and Lyrics listed.  I almost picked that one, but then remembered another movie of his I hadn't seen yet, so I kept going.  And once I found The Rewrite, I clicked Watch and spent the next few hours with Hugh and Marisa Tomei in Birmingham NY.  It features some of my other favorite actors - Allison Janney and J.K. Simmons.

Hugh's character is a screen writer in Hollywood, years after his success, trying to get any job he can.  And right now, the only job he can get is as a screenwriting professor at this college. He plans to go there, do as little as possible and spend time on his own project.  But as you can imagine, it doesn't go that way.  Especially with his attitude that you can't teach writing.

So I got thinking: can you teach writing? Some must think so, based on all the classes, workshops, books, forums, conferences, and blogs out there.  Maybe teach is the wrong word.  Or maybe the way we think about teaching, like it's only rote memorization, might give one pause about whether writing is teachable.

On the other side of the coin, is writing learnable? Maybe some people can't grasp the concepts of plotting or resolution or risk/reward and therefore can't learn to write.

I've recently talked to someone who is interested in writing a novel.  They've never written before, but they have this story inside them they want to tell.  And it's a pretty intriguing concept.  So I gave her the basic advice: Write. Read about writing. Join a writer's group. Find a critique group.  Use your library resources - whether that's for research, other writers, writing resources, or books in the same genre to see what works (and what doesn't) in other stories.

Today's Tweet (hey, are you following me on Twitter?  Why not?  Find me @FaithProofing) gives a resource that's been out of print for years, but the blog author has found invaluable for playwriting.  The author of the book (The Human Nature of Play Writing) wrote a thing or two: the play The Jazz Singer (the basis of the first movie with sound and music) and some scripts for  Alfred Hitchcock's Suspicion and Ernst Lubitsch's The Shop Around the Corner(one of my favorites...in all its incarnations).  So if you are in the market for another book on writing, check it out and let me know what you think.


For the first time in decades, the best book ever written about writing is back in print

Ouch.  I just looked at the date of the last blog post: August 23.

Where have I been since the end of the summer, you may ask?  Well, I've been in big cities, the wide-open ranches of Texas, the South right at the end of the Civil War, Las Vegas, Boston, the Canadian mountains, prison in California, planets out of our solar system, San Fransisco, small towns,  a world of zombie and alien invasions at once. I've been hanging out with lovers and fighters, losers and winners, people struggling to find themselves or find each other, people with a mission, and people searching for meaning.

In other words, I've been in books.  But I've also had some real-life stuff going on.  My son graduated from college, moved to DC for a few months, came home, moved to Denver. I worked on my annual Basket Bonanza fundraiser (thanks to everyone who donated!), as well as some other church projects. I've had some great fun with the hubby at a water park.  I've had some great results with a new workout/food program (lost almost 20 pounds!).  And I've started taking swimming lessons (no, I never learned to swim when I was kid.) 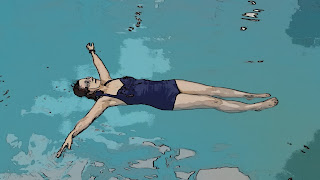 But I haven't blogged.  Why? Well, yes, all that other stuff kept me busy. But I've felt like I didn't have much to say, for some reason.  Not much motivation to write (thank goodness writing's not my job!). But I do hope that changes.  I like to write, when I have something to say.

So for now I'll say Merry Christmas, Happy New Year, Happy Holidays...or maybe a simple hello and I'm thinking of you!
Posted by Faith at 1:08 PM No comments: