Now, I don't want to come across as militant, but I am ready to take a stand...against standing. Standing in doorways, in hallways, in rooms, and in front of me - I can't take all this standing.


Let's look at an example:

I turned around and saw him standing in the doorway.

Well, unless he is in a wheelchair, or for some reason he wouldn't be standing (maybe he's been hobbled like Paul Sheldon in Misery and he can only drag himself from place to place), why does a reader need to know he's standing? It'd be a miracle if he was wheelchair-bound and suddenly he stood in a doorway.  That's important information in that instance.  But just a guy in a doorway? What else would he be doing besides standing?

Okay, maybe he's leaning against the doorframe.  Maybe with a smile on his face I can't resist.  Or maybe he's crouched slightly, gun in hand and ready to shoot me (or maybe the guy who's holding me hostage - yeah, that's better).

I turned around. He leaned against the doorframe, a smile on his face.  Not just a smile, but that smile.  The one that got me every time.

I turned around. I barely had enough time to register the crouched form of a man before I saw the gun come up and heard the kidnapper fall to the ground. 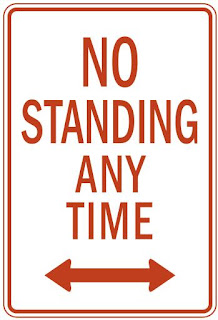 Give me some action!
Posted by Faith at 3:34 PM No comments: