Looking to Alter the Altar

An altar is a table or place which serves as a center of worship or ritual — often used with the to refer to the act of getting married.  Here's the altar at my little church at Christmas: 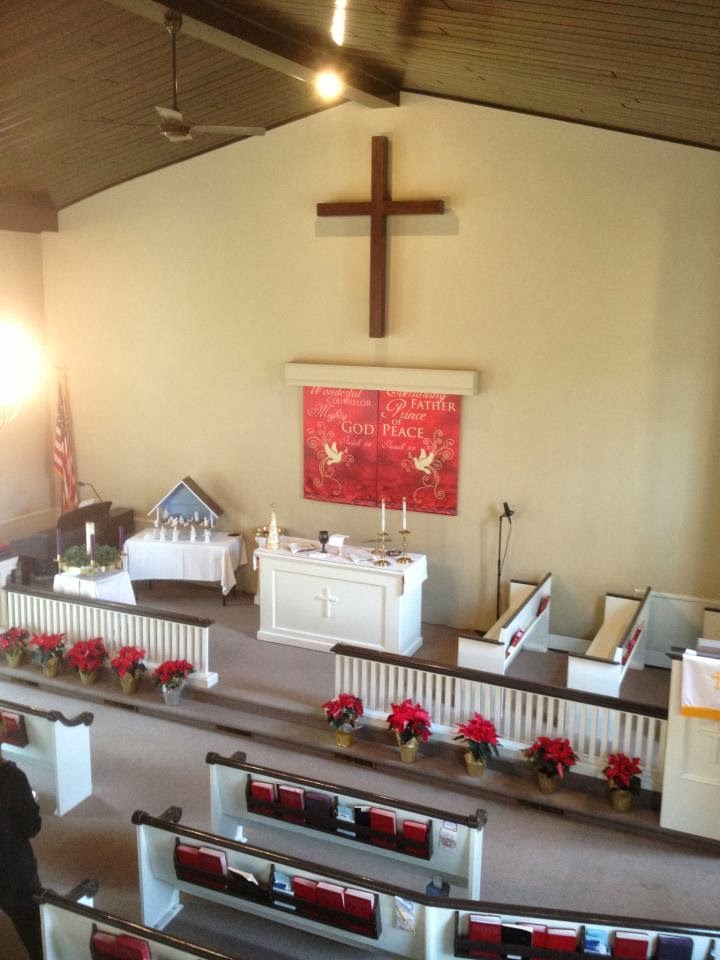 Sometimes people will talk about it a bit more figuratively:

A raised structure (such as a block, pile of blocks, pillar, or stand) on which sacrifices are offered or incense burned (as in the worship of a deity or of the spirit of a deceased ancestor) — often used figuratively to describe a thing given great or undue precedence or value especially at the cost of something else <He sacrificed his family life on the altar of career advancement.>

So if you want to see what happens when you alter an altar, here you go: 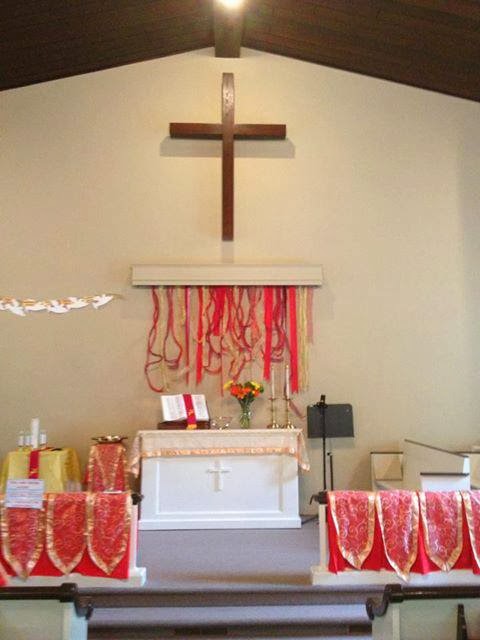 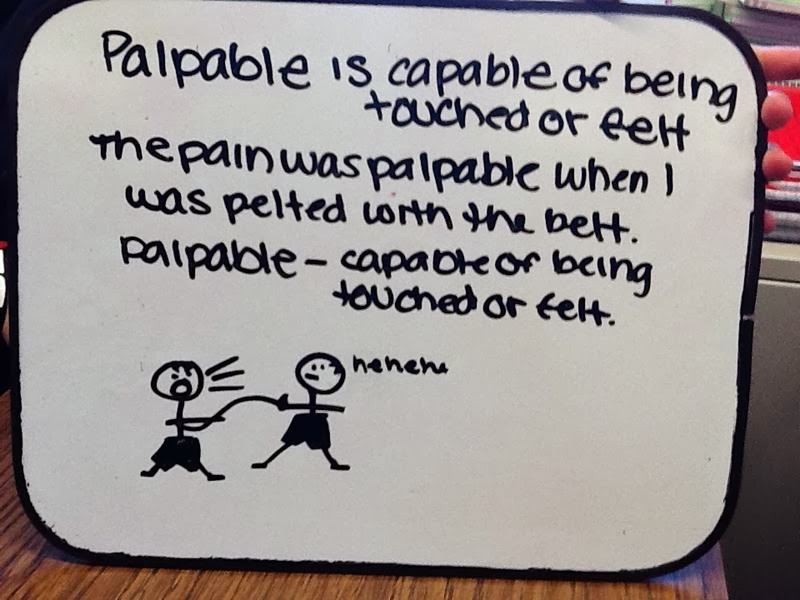 And trust me when I say that searching images for this word can be a bit Not Safe For Work (or your delicate stomach).  Palpable is also something doctors talk about - as in, palpable tumors or bumps or cysts.  So I don't recommend looking too much at those pictures! 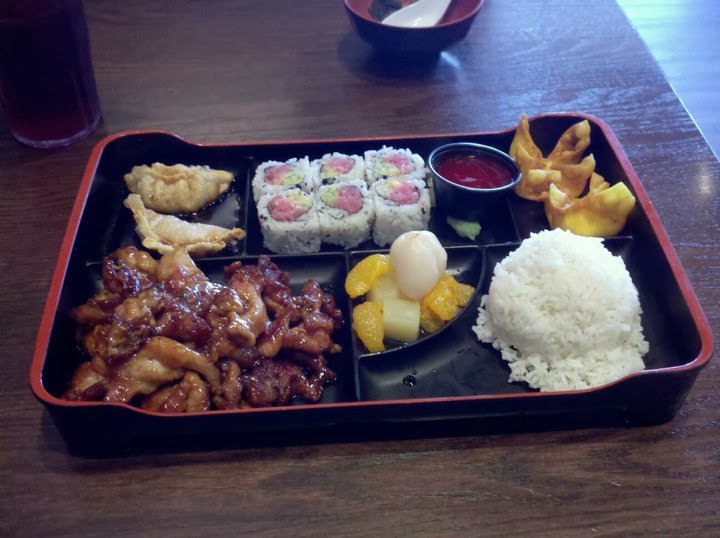 Here's a picture I swiped from my hubby's Facebook page (thanks, honey!) of a meal he was eager to dig in to.  I don't particularly find sushi palatable, but hey, he likes it...and so do plenty of other people.

When you are describing something yummy, delicious, or that will go down easy, PALATABLE is the way to go (think table, where you'd sit for some of that deliciousness.)

When you are describing something you can feel (either in reality or perception), PALPABLE is the way to go.  It's a cliche, but most often I see it used as the tension in the air was palpable.

This post has been circling in my head for a few weeks now.  I mostly think of the awesome things I want to say about ten seconds before I fall asleep.  So, it's taken awhile to get it down on paper (or, on the blog post, as the case may be).

{And here it is, February now, and I am just getting back to this draft to finish my thought.  Hmmm, must have been busy with holidays.  And snow.  And more snow.  And maybe a few books...  So please forgive the November and December references four.months.later <hangs head in shame>.}


Thanksgiving has just passed and in that tradition, I've seen lots of Facebook statuses, Tweets, and blog posts on what people are thankful for. And you wouldn't be surprised at the type of things listed: family, friends, good health, the Internet (well, okay, maybe that's just at my house...).

As this Thanksgiving time has been in the forefront, I've also been working on getting the newsletter (sign up here - I'll wait!) ready for December.  This month's Author Interview is with Rick Bettencourt.   As I read through his answers to the question about his favorite books growing up, it amazed me that there were some books we both loved and we both would read well past bedtime.

It started me thinking about what I read as a child and how it impacted my world. In an earlier post, I shared my love of reading, snuggled up to the heat vent in the kitchen.  But just as often, I'd be reading in bed.  At the kitchen table (if no book was available, the side of the cereal box would do in a pinch!). While watching TV.  And sometimes outside, in the little hiding places I found on the property.  (Although I never did get the hang of reading in a tub.) I could read in the car (I wish I still could without getting a headache and wanting to throw up! I can't even read a map in the car without feeling queasy now!)

Without books in my childhood, I'd never have imagined worlds with wizards and brave little girls from Kansas (The Wizard of Oz and all the sequels).  I'd never have tried to make maple snow candy (Little House on the Prairie and all the sequels).  I'd never have envisioned a family with two sets of twins and the adventures they had (The Bobbsey Twins). I'd never traveled the world with a reporter and his trusty dog Snowy (The Adventures of Tintin). I'd never dared to think a girl could live on her own and dare to defy the adults in her world (Pippi Longstocking). I'd never start to think of people of different faiths, different backgrounds, different genders as people just like me.

I'd be remiss if I didn't mention my love of, well, love stories.  I used to go to Whitlock's Book Barn and convince my mother (ok, whine and whine and whine until she agreed) that Harlequin romances were exactly what I needed to read.  (It also probably helped that she never read them - she'd probably never let them in the house if she'd actually read some of that stuff!) Of course, I got my hands on a Judy Blume book - I can't remember if it was Smart Women or Summer Sisters - that she had in the house, so she's not totally off the hook!

The person you are today is because of the things you have experienced in your life: the good, the bad, the boring, the exhilarating. And that includes reading: reading about different places, different people, different lifestyles - or even people just like you in similar circumstances -  and making that part of your human experience.

So, to all the authors out there, thank you for brightening your readers' worlds.  You are the magicians who make it all happen.

Let's welcome this month's Author Interview, Pamela Fryer. She is the author of One Snowy Night Before Christmas, Once Upon a Christmas Carol, The Lost Finder, August Unknown, Last Rights, The Midnight Effect, and contributed to Romance Super Bundle and most recently, Love, Valentine Style.

I am especially happy to have her featured this month because she is the gracious winner of my 2013 Favorite Goof Contest!

Take it away, Pam!

A Winner! A Winner!

I know I promised this some time ago, but I have contacted the winner of the 2013 Favorite Goof.  After all the voting was in, you chose Pamela Fryer's classic line:


Thanks to you, a major catastrophe has been averted, and a serious coo thwarted.

What she meant to write was:
Thanks to you, a major catastrophe has been averted, and a serious coup thwarted.