Everybody Gets Their Own 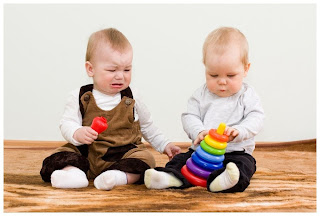 But there are times you have to share, even when you don't want to.  Sometimes, it's your parent making you share with your siblings.  Or your teacher making you share the glitter with your art partner.  Or at the playground, everyone has to take their turn down the slide.

But there are times, oh-so-special times, when you get everything to yourself.  Maybe your older brother isn't home, so he doesn't get any pie. But you do.  Or maybe your teacher has enough supplies that you can create the most awesome, spectacular rainbow of glitter that ever graced a refrigerator door.  Or maybe no one is at the park, and you can slide down that slide time after time without interruption or waiting in line.

But what does this have to do with writing, you ask.  Well, let me tell you:

Every person speaking or acting gets their own sentences and most of the time, they get their own paragraphs, too!  It's how readers keep track of who's talking or who's doing something.

Let's take this example:
Wrapping his arms around her, she snuggled in closer.

Here you have 1) a guy wrapping his arms around a woman and 2) a woman snuggling in closer.  These are two separate actions by two separate people.

The better sentence construction is:
He wrapped his arms around her; she snuggled in closer.

Using the semi-colon and adding a subject (He, in this case) gives the reader a clearer understanding of what is going on.  Remember that each side of the semi-colon is a complete sentence (subject + verb).

You could separate the sentences like this:
He wrapped his arms around her.  She snuggled in closer.

But because these sentences are so close in action/reaction, it's perfectly acceptable to use a semi-colon. 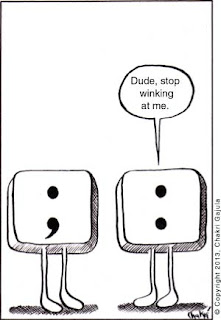 (Not that I'm pushing the use of semi-colons, but hey, that's what they are there for!)

Most of the time, though, you'll have a paragraph with each separate characters actions and dialogue.  Let's keep using that earlier example:

He wrapped his arms around her.  He thought he would never get enough of holding her like this, and kept his eyes closed, inhaling her scent.  He felt her snuggle in, as if she, too, could not bear to be out of his arms.

She sighed, knowing that she shouldn't cling to him.  But...he was there and she needed his strength to get through the next hour.  Just a little bit longer, she told herself.  Then she would let him go.

See how easy it is to know who is doing the thinking in each paragraph?


So if your characters are "sharing," be sure to make sure your reader can tell who is doing or saying it. But don't be shy about having your characters be selfish and have sentences or paragraphs of their own.
Posted by Faith at 9:43 PM