I've watched a few of these MarieTV spots on YouTube, but I really liked this one for a year-end review process:


So here are my answers to her 3 questions:


1) What did I do, create, or experience this year that I'm really proud of: I am picking experiences here. I am proud of my continued dedication to my swim lessons.  Now, this may seem peculiar, but if you factor in how afraid of water - much less actual swimming - I had been in the past, you can see how sticking to the lessons for a year and a half now is quite the achievement. I really look forward to my lessons: the time in the pool, learning a new skill (I'm currently struggling with the dolphin move) and fine-tuning it until it's just about perfect, and frankly, doing something I thought I'd never do.

The other experience I'm proud of is my attendance at the EFA National Conference.  Again, it might seem weird to you outgoing types, but for this introvert to go into (what I perceived, anyway) a large group of strangers and make it a point to talk to new people - well, it was a big deal.


2) What mistakes did I make that taught me something?  What lessons did I learn that I can leverage? I'm not sure what I'd consider a mistake in 2016; I'm sure there was something I did wrong at least once. So I think I'm going to say my mistake (and not one isolated to 2016) is my tendency to think I can't do something...that I don't have the skills or the talent or the innate quality to be successful at whatever that particular "thing" is. But the truth is I can do things I think I can't (see above re:swimming).  I'm learning all the time...I just have to realize I can and I am, and feel confident that I even if I am a beginner or novice, every expert started just like me. 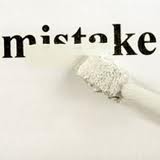 3) What am I willing to let go of? This one is a bit harder. I don't like to let go of things (just ask my husband!). But maybe I can let go of my disappointments (I really don't have to dwell on them, especially in the middle of the night!) when things don't go quite my way...or the way they have always gone. I need to let go of that negative attitude, that negative mindset, when it sneaks up on me. 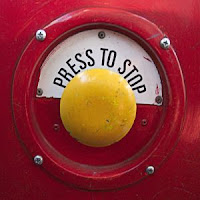 So what about you? Can you take a few minutes an answer these 3 questions? Share in the comments (if you dare!).

Oh, You Are So Punny!

The first time I met The Boy's current Girlfriend, we were in Denver, visiting The Hubby's family.  So it was me, The Hubby, The Boy, The Girlfriend, Grandma, and Aunt Dee driving down the highway. And one of us (not The Boy or the Girlfriend) starting making some snarky, punny conversation.  We all laughed a bit and then quieted down.  I looked back at The Girlfriend and said, "Doesn't being with someone's family explain a whole about them?"

My family has always appreciated good word play.  And sarcasm (but that's another post for another time). Maybe that's why I love reading and books and authors-and yes, even editing-so much.  I grew up with words running around in my head, even if I never spoke them.

The editor groups I participate in on Facebook have no shortage of pun enthusiasts.  Here's a recent post: 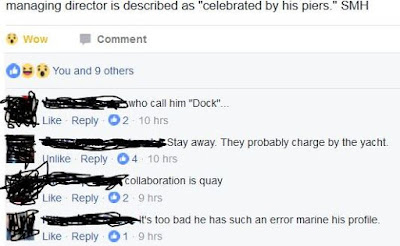 And not to get on a political note here, but I couldn't help but laugh at this one: 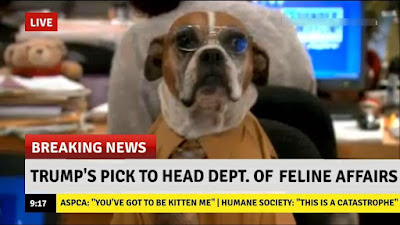 My brother just shared Mental Floss's article on puns (This Is Your Brain On Puns - which, of course is a play on the anti-drug commercial "This is your brain on drugs" with the fried egg). It's a pretty quick article on how the left and right sides of your brain work to figure out puns.

A few years ago, I found out there was a contest of puns: the O. Henry Pun-off World Championship.  I'm not sure how this wonderful event found its way into my world, but it's a cool idea: a bunch of people celebrating our wonderful world of words and often employing humor to do so.

I've decided to run another contest for 2017, and this time I'm letting you all know what it's about.  And if you guessed puns, you'd be right. So for all of 2017, I'll be keeping track of the puns (or just the stuff the tickles my funny bone) and have a year-end poll for the best pun of 2017. 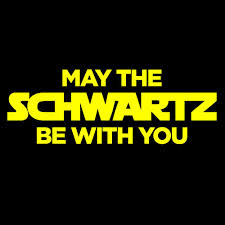 The Beauty of Automation

Okay, this is just a test of the emergency broadcast system.  If this was a real emergency, you shouldn't be on the Internet...you should be doing something to stay alive.

Seriously, though, I am testing out a new service to have all my blog posts show up on my Atwater Group Facebook page.  So if this shows up on Facebook, I know I did it right.

Email ThisBlogThis!Share to TwitterShare to FacebookShare to Pinterest
Labels: The Atwater Group, Tools of the Trade

Getting My Ducks in a Row 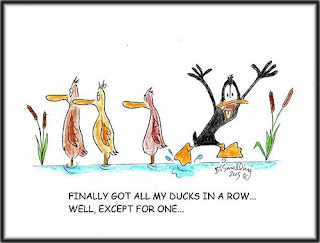 So, I've actually got a workday where I have no work to do...but yes, there is work to do!  I've just spent the last hour or so adding tags to all of my blog posts.  I had some in there, but I really let that part of blogging go (not that any other part of my blogging has been a shining example of good blogging, but whatever).

And it was fun to revisit some of those older blog posts and remember some of what prompted them.  It was kind of like reading my work diary over the past few years.

Anyway, back to work... Part of the reasoning to get the blog posts properly tagged/labeled was to make it easier to search and to jump-start some ideas for my 2017 blogging.  (After all, if I've already talked about something, do I need to keep harping and harping on it? Maybe...) So I am setting up a spreadsheet with ideas, categories, and a calendar so I can be a bit more organized for blogging in 2017 (see goal #4 here).  I am thinking I might ask anyone who has done an Author Interview to do an updated one - although I haven't figured out what new questions I'd ask.  But I think it would be cool to see how authors have changed (if at all) and what their writing career looks like now - sort of a "Where Are They Now" thing.

But I am really going to try to get my ducks in a row to give me a good start to 2017 and beyond. Not that 2016 was horrible or anything, but I feel like I need to be more prepared for things, not just go at them willy-nilly. Or get distracted by squirrels - that's Dudley's job! 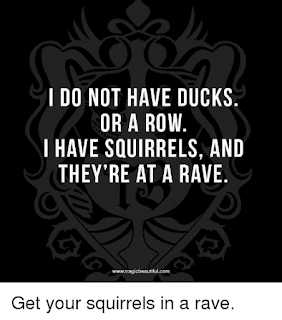 (And aren't you impressed about this second blog post in under a week?)

Am I Crazy or What?

Yes, yes, I know it's been several (okay, almost six) months since I last wrote. It's just been so busy - in so many great ways.  My last post was just after my summer vacation, and after that wonderful, restful time...it was back to work! And more work! And volunteer work! And some house projects (okay, I didn't really do any real work...I was just there to see all the work get done and make sure no one melted away in the oppressive August heat).

And The Boy and The Girlfriend visited at the end of October.  It was nice to visit with them...and have him take my car on adventures as they went to Boston for a friend's wedding. Some things never change...kids always want the keys to the car.

Now Thanksgiving is over (let us give thanks!) and Christmas and New Years is staring us in the face.  And I suspect 2017 is going to be just as busy, crazy, eventful, happy, sad, interesting, terrifying, and uplifting as 2016.

But I have a few changes in store for 2017, so I'm working on my goals early this year.  And by early, I just mean not on Dec. 31. I'm going to take some time over the next few weeks (even if it's just 5 minutes before I go to sleep) to really think about the things I want to accomplish for 2017.  Here's my preliminary list, in no particular order:

1) 2017 is a "go to a writer's conference" year (2016 was my EFA conference, which apparently I only blogged about in my dreams).  I had thought it'd be Romantic Times in Atlanta, but I don't see many (actually, I think there was only 1) of my authors signed up to go.  So I'm thinking I might go to RWA Nationals in Orlando instead.

2) That leads into the probability of joining RWA, and maybe an online chapter.  There are a few chapters in my state, but I'm not sure I have the actual time to go to an actual meeting.  And that's because...

3) In addition to everything else I'm doing already, I've decided to head up the CT Chapter of the Editorial Freelancers Association. Our previous leader got a full-time job editing, and doesn't have the time to continue.  I really liked our meetings, even when they were just networking/talking with other editors, so if I wanted them to continue, either I had to wait for someone to take the position or do it myself...otherwise the chapter would have been dissolved. So, yeah, after waiting a few weeks and checking in, no one else had expressed any interest in heading up the chapter.  So...there you go.

It probably seems a bit crazy for me to take on this additional responsibility. After all, I can't even keep up with a blog on any kind of regular basis, right? Which leads to...

4) I am going to write out a schedule of blogging.  It won't be much - maybe twice a month - but I need to get back in the habit.  I often use my blog posts to illustrate a point to my authors (how many of you have seen a link in the manuscript comments to a post I'd done in the past?), so it's a useful tool for me to have.  And if I had a plan of some sort, I could either follow it (Gasp! Follow a plan!?!) or ignore it for something I felt needed to be touched on.

How about you? Are you thinking ahead to 2017? Do you have ideas about what you'd like to accomplish?
Posted by Faith at 9:30 AM No comments: